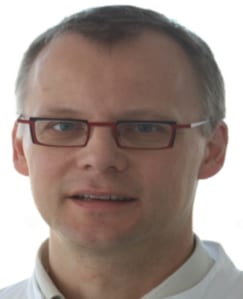 Professor Heiner Wedemeyer is Principal Investigator in the Department of Gastroenterology, Hepatology and Endocrinology at Hannover Medical School in Germany. He studied musicology and medicine and graduated in Medicine from the University of Göttingen, Germany. From 1998-2000, Professor Wedemeyer worked as a research fellow in immunology in the Liver Diseases Section at the National Institutes of Health in Bethesda, Maryland, USA. Since 2001, he has been a Senior Physician in gastroenterology and hepatology in the Department of Gastroenterology, Hepatology and Endocrinology in Hannover, where he leads a research group on T cell immunology and heads the hepatitis diagnostic laboratory.

Since 2002, Professor Wedemeyer has been the Scientific Secretary of the German Network of Competence on Viral Hepatitis (funded by the German Ministry for Education and Research). His research has been supported by the Deutsche Forschungsgemeinschaft, the German Ministry for Research and Education, the European Union, the European Association for the Study of the Liver, Hep-Net and the Bill and Melinda Gates Foundation.

Professor Wedemeyer has worked on basic and clinical aspects of hepatitis viral infections since 1996. His main interests are the immunopathogenesis of hepatitis B, hepatitis C and hepatitis D and the development of novel immunomodulatory therapies, such as therapeutic vaccines for hepatitis C. He has been involved as an Investigator in several Phase I–IV clinical trials of antiviral drugs and immunotherapies for viral hepatitis and has published more than 150 articles in peer reviewed journals. Prof. Wedemeyer joined the Governing Board of the European Association for the Study of the Liver from 2008-2011 and has been appointed as EASL Secretary General from April 2009-April 2011.